Amy Jo helps people do difficult things. She guides them down the black diamond slopes of business and life. She is the author of the New York Times best-selling book Renegades Write the Rules, host of the Why Not Now? Podcast and founder of the Renegade Brand Bootcamp.

Prior to becoming an entrepreneur, Amy Jo began working for the NBA’s Phoenix Suns during their 2005-06 season. These were the wild wild west days of social media and there were no rules or regulations in place.

After her boss at the Suns singled Amy Jo out as a “Renegade” (Amy Jo took this as a positive, not a negative) Amy Jo had her first Why Not Now? idea.

In that moment of bravery, she took the leap and founded one of the first ever social media agencies to help corporations, celebrities and sports entities humanize their brands online through social communication channels. Amy Jo has worked closely with world-renowned brands such as Hilton Worldwide, Dwayne “The Rock” Johnson and Shaquille O’Neal to successfully humanize their presence.

Her motto: humans connect with humans, not logos. Tony Hsieh, CEO of Zappos.com, and Baron Davis, NBA player, invested in Amy Jo’s agency, and after a successful seven-year run growing the business in ten different countries, Amy Jo exited that company in 2016.

With a social media following of more than 1 million people, Amy Jo was named the third most powerful woman on Twitter by Forbes and has spoken to thousands of entrepreneurs, intrapreneurs, brands and individuals at events around the globe, sharing her Renegade Mentality philosophy, tools and life lessons.

As a young female building her career in male-centric industries, Amy Jo has developed a passion for helping women thrive in business and leadership. Most recently she founded Why Not Now? Media and launched the Renegade Brand Bootcamp: an intensive two month training program designed to assist female founders and entrepreneurs reach their full potential in business, and life.

Recently Amy Jo became a Mom for the first time. Lincoln, a little Renegade in the making, has already made his mark on the world in a big way. In true Renegade fashion, Amy Jo lives in the forest with her husband Richard, Lincoln and their two Aussie Shepherds.

Amy Jo is also a contributor to news outlets including the Harvard Business Review, AdWeek, Huffington Post and Sports Business Journal. She has been featured in top-tier media outlets including Vanity Fair, TIME, Forbes, The New York Times, Fast Company, ESPN SportsCenter, USA Today, MSNBC, Newsweek and many others.

Throughout her career, Amy Jo has had more than 150 vulnerable and intimate conversations with Renegades like Simon Sinek, Tony Robbins, Jessica Alba, Dwayne “The Rock” Johnson, Mark Cuban, Arianna Huffington and many others. During these discussions she has helped to dissect their critical “Why Not Now?” moments when they navigated across the messy bridge from idea to action, dreaming to doing. Amy Jo has spotted consistent rules – Renegade Rules – that have surfaced within her research. She shares the colorful stories and formula with her audience as she guides them through their own Why Not Now? ideas.

In addition, and after working with some of the world’s most progressive innovator’s over the past 20 years and writing a NYT best-selling book on the topic, Amy Jo shares tangible, practical ways to humanize your personal brand online to build relationships that convert. She will discuss how your personal brand strategy and digital footprint can be leveraged to have a positive, revenue-generating, impact on your life and business. Humans connect with humans, not logos, and connections convert. 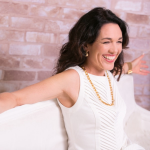 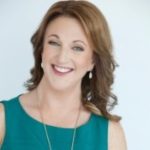 Want to bring Amy Jo Martin to your next event?  Please tell us a little about your event, and we will get back to you shortly!