Katie Goodman is an award-winning musical comic, actress, author, and speaker. She has been seen on Showtime’s The Green Room, on Current TV as a pundit, and on TruTV. She recently signed with Comedy Dynamics, North American’s largest independent record label, and her new album “Halfway Closer To Dead” is available on Itunes, her books on Amazon, and her comedy music videos can be seen, having amassed over 2 million hits on Youtube and several more million on Facebook.

Katie is also a featured blogger for The Huffington Post, has contributed to O, The Oprah Magazine and is the author of Improvisation For The Spirit and the new funny children’s book, The Night Our Parents Went Out. She is a nationally touring keynote speaker on the topic of using the tools of improv comedy in every day life. She is the creator and headliner of “Broad Comedy,” an internationally touring satirical musical show that she and her husband Soren Kisiel write and direct. Her solo show is presently playing Off-Broadway in New York City where she received a Time Out New York Critic’s Pick for Best Cabaret. Katie and Soren were nominated for The EPIC Award from The White House Project and were also nominated for the MacArthur Foundation Genius Grant for their extensive work in theatre.

Women’s insights are changing the business world. Now is the time to know the power of your ideas, and to trust what you have to offer. Women’s workshops and keynotes in an all-female atmosphere give women a safe and fun place to practice finding their voice… and use it!

Outside The Box, Inside The Budget

Dreaming and scheming is a good thing but there are always constraints. Like any rules of improvisation, constraints actually help us be more creative. They offer boundaries and limit our choices, helping us avoid overwhelm. Katie will show you how to look at your budget as a useful tool to keep your creativity flowing.

Allowing for Safe & Creative Risk-Taking: Improv games and exercises teach us how to become someone who is comfortable taking creative risks for our business, entrepreneurship, and personal lives. Nothing exciting or new happens in business without creative risks.

Crucial for a business and for our personal lives. Katie will lead you through learning how to actually love the stages of being lost and the thrill of coming out the other side with new ideas and ready for action.

Collaboration in the Workplace

Improv is all about collaboration. Katie gives participants the chance to explore new ways of collaborating that will benefit them in deep and meaningful ways. She will put energy and fun back in your interactions and connections, leading to a healthier work environment.

Our Inner Critic keeps us from reaching our potential and living our best life. In a company, it keeps people from taking creative and innovative leaps, from supporting each other, and slows down progress. We can learn to transform our Inner Critic to a helpful Inner Coach that blazes the way for our personal growth and allows us to show up fully and reach our potential.

VIRTUAL KEYNOTES: Katie teaches how to use the tools of improv comedy to access creativity and innovation for the workplace. Katie’s funny and fast-paced keynotes are smart, lively, and approachable. She will customize the content to focus on your company’s specific needs, focusing on:

● Improvise & Innovate Your Way Through Change

● Find Comfort In The Unknown: How To Handle ANYTHING

● How To Pivot And Stay Creative

● Women Killing It: Now Is Our Time

Improv comedy requires quick thinking, collaboration, adaptability, trust, and the ability to live in the moment without being a perfectionist. These are skills we can all learn to use to be happier and more innovative and effective each day.

The Huffington Post
"If Robin Williams and Dear Abby had a baby and hired Tony Robbins to raise it, you might get someone as bright, funny, insightful, and inspiring as Katie Goodman. But why bother, she's already here -- dispensing laugh-inducing and life-changing lessons. Punchlines have never been so practical. Life is one big ad-lib and Improvisation For The Spirit shows you how to bring the house down."
60 Minutes
“Katie Goodman is spontaneous, creative and fearless. Filled with anecdotes and prescriptions for finding courage. Smart, wise and hilarious.”
InterRel Consulting
"In our jobs, every meeting has something unexpected, every client interaction goes a different direction than you intended, and every day brings a situation you couldn't imagine. We engaged Katie to walk us through the improv process so that when something unplanned happens, we can react in a positive way in the moment (and hopefully with humor). The immediate business benefits of Katie's training have improved our interactions across the company both internally and with our clients. We are also having a lot more fun with each other, and that boost to morale is immeasurable."
O, The Oprah Magazine
"Katie Goodman's improv-comedy/life coaching approach is fantastic. Her guidance and feedback taught me more about myself than years of therapy, giving me insights I never thought possible without the help of psychotropic mushrooms. Line up to buy her books and workshops--she's worth it!"
Related Speakers 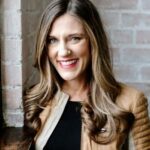 Want to bring Katie Goodman to your next event?  Please tell us a little about your event, and we will get back to you shortly!