Television voice of Big 12 Men’s Basketball, Kansas Jayhawks, Iowa State Cyclones, and a variety of sports events for such networks as ESPN and Fox Sports.

Dave Armstrong is an award-winning announcer who has covered sports at both the Professional and Collegiate level for more than 20 years. He has been the play-by-play “voice” of the Big 12 Conference for men’s basketball since it started, calling the action each week on the Big 12 Network. His trademark “Wow!” is heard on each and every broadcast.

Dave is also familiar to baseball fans as he had the honor of broadcasting Major League Baseball for almost a decade. He was the Television voice of both the Kansas City Royals and the Colorado Rockies. He also broadcast for The Baseball Network and Baseball Saturday Night on FX.

Dave has broadcast games in the National Football League as the play-by-play voice for both the Kansas City Chiefs and the Seattle Seahawks.

He has also called games in the NBA for the Denver Nuggets.

Dave started his broadcasting career at KGGF radio in Coffeyville, Kansas. He covered the Sunflower State during the early years of his career. Working at KKOY radio in Chanute, KAYS television in Hays and then six years as Sports Director at KSNW television in Wichita.

In addition to his career as a broadcaster, Dave is also an accomplished author, speaker and event emcee. Leveraging his signature theme, Broadcast Success, he conducts workshops nationwide for business executives seeking innovative, insightful and inspirational ways to lead their organizations to higher levels of performance.

How to Broadcast Success

Dave capitalizes on his wealth of experience in broadcasting to inspire his audience with the notion that we are all broadcasters. We send out signals everyday. The message we send is the difference between success and failure. This is an entertaining, funny and insightful message that appeals to all audiences. Also great for a possible breakout session!

Dave takes a hard look at a former boss, Dale McCoy, and dissects what made him such a great leader. This is a four-part program designed to inspire the leaders of today and tomorrow.

Driving From Here to Wow!

Dave tells tales from his life on a road covering sports across the nation. This is an often-hilarious ride that will leave your audience both entertained and inspired. 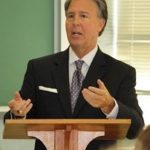 Want to bring Dave Armstrong to your next event?  Please tell us a little about your event, and we will get back to you shortly!