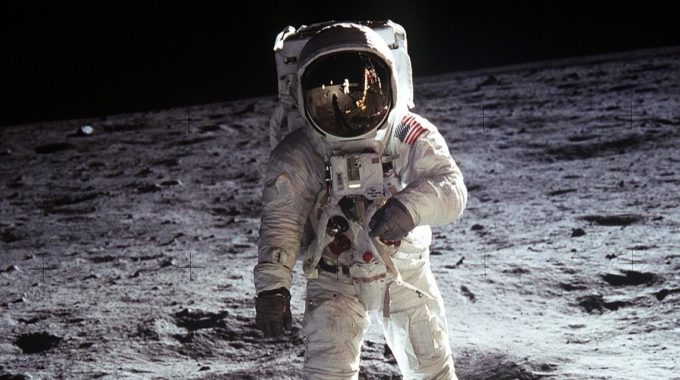 With ever-expanding anxiety around coronavirus, it can feel as if the end is near, there is no reason for hope and we are all doomed.  Just go home, wash your hands and wait for the end.

And yet, it’s heartening to remember: This is far from the first time we’ve stewed in adversity as a nation or as a global marketplace.

I wanted to share a brief story from Chapter 1 of my forthcoming book IN AWE to remind you that not only have we weathered even mightier storms together, but ultimately are able to move forward when we lead with a mighty vision.

It was a swelteringly hot day in Houston, Texas. The date was September 12, 1962. President John F. Kennedy was speaking in front of an audience of forty thousand people at Rice University.

Although it was only twelve days into the month of September, it had already been an eventful month. A 7.1-magnitude earthquake in Iran killed more than twelve thousand people. The entire world was on edge on the eve of what was to become known as the Cuban Missile Crisis. Global financial markets remained sluggish. The Supreme Court had just ordered the admission of the first African American student to the segregated University of Mississippi.

It was a time of turmoil and tension, frustration and fear. There were natural disasters, political protests, and cultural uprisings. Sound familiar?

It was with this background that the president prepared to speak in Houston. Kennedy knew what was in the hearts and on the minds of the American people. He understood they were feeling bewildered, nervous, lost, and unmoored. And he set before them that day a grand, compelling vision, a mighty goal.

A goal many thought impossible, if not outright lunacy.

It was a massive dream, one that would require all the best of America: collaboration, brains, innovation, and determination.

He set before us the goal of landing a man on the moon before the end of the decade.

In an unusually lengthy and poetic sentence, he reminded those listening of both the weight of the challenge and the solution to it.

“But if I were to say, my fellow citizens, that we shall send to the moon, 240,000 miles away from the control station in Houston, a giant rocket more than 300 feet tall, the length of this football field, made of new metal alloys, some of which have not yet been invented, capable of standing heat and stresses several times more than have ever been experienced, fitted together with a precision better than the finest watch, carrying all the equipment needed for propulsion, guidance, control, communications, food and survival, on an untried mission, to an unknown celestial body, and then return it safely to earth, re-entering the atmosphere at speeds of over 25,000 miles per hour, causing heat about half that of the temperature of the sun—almost as hot as it is here today—and do all this, and do it right, and do it first before this decade is out—then we must be bold.

It was an unprecedented vision.
A daunting task.
An impossible dream.

And yet before the decade ended, just as Kennedy had promised, Americans heard astronaut Neil Armstrong, upon stepping on the moon’s surface, announce, “That’s one small step for man, one giant leap for mankind.

A couple of guys, strapped into a metal lunar module launched 240,000 miles away from earth, landed safely on the moon, bounced around a little while thanks to the lower gravity of the moon, planted a flag, grabbed some rocks, took some pictures, got back into their vessel and returned home safely. All with computing technology far inferior to that found in your old flip phone.

But they did it. When Kennedy urged America and Americans to be bold, he was saying that to accomplish this goal, we would have to throw out the rule book, put our boundless creativity, curiosity, and determination to the test, and keep at it relentlessly until we accomplished our goal.

This is how we make big moves and enact true change. We put our minds together and invite our sense of wonder to push boundaries, reject limits, and go where no one has ever gone before.

Regrettably, our government leaders today speak less of bringing people together to create something bigger than themselves and more about protecting what we already possess. Our focus as individuals seems to be less about how much we can accomplish together and more about getting through the day. Far more effort is spent guarding what we have than expanding what, and who, we could become.

Why have we stopped thinking differently, and aiming for the moon?
It’s because we’ve lost touch with our sense of wonder.
And it’s time to get reacquainted.

My friends, it’s critically important in our lives (individually and collectively) to still have visions of going to the moon and not becoming a victim to headwind, headlines or hesitations that keep us bound to fear.

As you launch into your day, be aware that last year 43 million cases of the flu were diagnosed. Understand that 650,000 people were hospitalized and more than 60,000 people died of the common flu. This is not stated to minimize coronavirus. Instead, to serve as a reminder that what we really need during scary times – as markets fall and rise, as offices close and open, as cases spread and recover – is perspective that we’ve been here before, we’ve weathered it together, life is precious and is intended to be lived fully.

And, in all sincerity, to wash my hands with greater frequency, elbow people rather than hug them, get plenty of sleep, but live this moment with the expectation and wonder that the best remains ahead.

Read the entire first chapter and order your copy of IN AWE here.

The landscape has changed for event planners, and it’s harder than it’s ever been to…

Overcoming FASCO in Times of Uncertainty with JJ Birden

Use Music to Jazz up Your Next Meeting

“When it’s done right, music is the secret ingredient for a killer presentation”