Redefine Possible with the Iron Cowboy

Known as The Iron Cowboy for the signature cowboy hat he wears while running races so his five kids can see him coming from far away, James Lawrence is an ultra endurance athlete who has pushed himself beyond what many doctors previously believed to be physiologically possible. In so doing, he has redefined both mental toughness and physical endurance.

Originally a high school wrestler, James spent a decade in the mortgage and finance business before losing it all in the financial crisis of 2008. At rock bottom, his career as the greatest endurance athlete on the planet started quite humbly, struggling to complete a local 4-mile fun run with his wife, Sunny. Inspired by that experience, on that day he learned a lesson that has served him well ever since.

“I learned quickly that everyone’s ‘hard’ is different. Back then, four miles was really difficult for me. I learned that one of the most important things in life is to just show up.” James Lawrence

Today, James is one of the most dynamic, inspiring, larger-than-life keynote speakers in the world, having shared his astonishing story in 50 different countries across the globe reaching millions of people. He is a best-selling author and the subject of a critically acclaimed feature film. He continues to redefine the impossible in his own life, while teaching audiences around the world to do the same in their own lives.

Known as the Iron Cowboy, James is an endurance athlete who has breaking records for years. In 2012, he completed 30 Ironman triathlons (2.4 mile swim, 112 mile bike, 26.2 mile run) in one year. No one had ever done anything close to this. In 2015, he did the unimaginable, completing 50 Ironman triathlons in 50 consecutive days in 50 different states, all while raising money to reduce childhood obesity. It was an amazing physical feat, an astounding logistics challenge and a fair bit of chaos, all at the same time. You can watch the trailer here for the critically acclaimed Amazon Prime documentary; Iron Cowboy | The Story of the 50.50.50. But that wasn’t enough. In 2021, he pushed further, a lot further, beyond what doctors and physiologists thought was humanly possible, and completed the CONQUER 100…100 Ironman distance triathlons in 100 consecutive days, this time raising money to combat sex trafficking. That’s 140.6 miles per day, every day, for 14 straight weeks, for a total of 14,060 miles!

Procter & Gamble
From start to finish, our P&G Experience with James was phenomenal. He absolutely electrified our audience.
Nike
James left us all inspired to dream big, to believe without a doubt, to push through adversity, and to accomplish the seeming impossible.
Clif Bar
James inspired our whole team with his message about the resiliency of the human spirit and the power our decisions can have over our circumstances.
Related Speakers 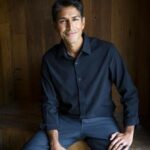 Want to bring James Lawrence “The Iron Cowboy” to your next event?  Please tell us a little about your event, and we will get back to you shortly!