Joe Gerstandt is a speaker, author, and advisor bringing greater clarity, action, and impact to organizational diversity and inclusion efforts.

Joe has worked with Fortune 100 corporations, small non-profits, government entities, and everything in between. He speaks at numerous conferences and summits and is a featured contributor for the Workforce Diversity Network Expert Forum. His insights have been published in Diversity Best Practices, Diversity Executive, HR Executive, numerous other print and on-line journals, and he co- authored the book Social Gravity: Harnessing the Natural Laws of Relationships.

Joe serves on the Intersectional Culture and Diversity Advisory (ICD) Council for the social networking platform, Twitter, the U.S. Technical Advisory Group’s Diversity and Inclusion Working Group within the International Organization for Standardization (ISO), and the board of directors for the Tri-Faith Initiative, which brings together in permanent residency a synagogue, church, mosque, and interfaith center on one 38-acre campus in the middle of America’s heartland.

Joe grew up on a family farm in NW Iowa, served four years in the United States Marine Corps, including participation in Operations Desert Shield and Desert Storm, attended Iowa State University and then spent 6 years working in management and business development for technology and communication companies. He then made a career change and went to work for a grassroots non- profit organization, and this is where he found himself drawn to issues related to diversity and inclusion and then became actively involved in that work.

Today, Joe believes that we can ill afford to continue applying a 20th century approach to an increasingly critical set of 21st century issues. A strong advocate for resetting the diversity and inclusion conversation, Joe sees diversity and inclusion as poorly understood and often misunderstood. His keynote messages and interactive workshops bring greater clarity, action, and impact to existing and new organizational diversity & inclusion efforts.

From “Anti” to “Ally”: A Story of Personal Transformation (60-90-minute keynote)

For the past 15 years, joe gerstandt has been helping organizations of all shapes and sizes to find new clarity relative to diversity and inclusion, and to put new practices in place. But he did not take a very direct route into this work, in fact there was a time in his life when he likely would have rolled his eyes at what he now does for a living. The often-discomforting experience of becoming aware of and addressing his own privilege, denial, bias, and bigotry still informs his work today. This is a story of how one person’s heart, mind, and behavior changed and what we might learn from it. From his own story of growing up on a family farm in rural Iowa, serving in the United States Marine Corps, personal and professional successes and setbacks, and just being in the world with other human beings, joe distills insights applicable toward leadership, behavior change, culture change, and enlisting more allies in this work.

What specifically do you mean when you use the word “inclusion?” It has become one of the most popular words relative to the modern workplace, yet in most organizations it remains a vague, ambiguous idea; and vague, ambiguous targets are incredibly hard to hit. If inclusion is the product you are trying to deliver, then you should be able to speak to its characteristics. This message brings a powerful new clarity to the concept of inclusion, what it is, why it matters and how it happens. The audience will leave this message with a strong foundation upon which to build impactful and sustainable diversity and inclusion initiatives.

Inclusive leadership requires more than a statement of commitment, it is an active practice. This session introduces you to that practice. Anchored in a practical model of what inclusion is, joe will introduce you to a set of competencies and commitments to ensure that your leadership is, in fact, inclusive. You will leave this session with work to do and tools to use, things that you can act on immediately.

Level up! This is an intense and highly interactive deep dive into inclusive leadership, that includes pre- and post-work. joe gerstandt will guide participants through an exploration of inclusive leadership competencies and commitments in four distinct areas; Awareness & Authenticity, Diversity, Inclusion, and Leadership; each with their own exercises, questions for personal reflection, and opportunities for practical application.

An internal hackathon is a high-energy, interactive way to model inclusion, invite greater diversity of thought and perspective into your inclusion efforts, generate creative new solutions, and build new relationships. Once participants are grounded in a common framework of inclusion, a basic process for “hacking,” a target and deliverables, they set to work competing against other teams with very real time constraints to solve an inclusion challenge within your organization.

Most leaders and organizations already care greatly about talent, but are we having the right conversation about talent? More and more of our work is today being done at the group or team level, yet our talent efforts remain laser focused on the individual level. We seem to be operating on the belief that if we group talented individuals together, we will naturally end up with talented groups. But it does not work that way, at the group level there are a bunch of other variables involved. This message provides research driven insights into what makes a talented team (cognitive diversity & psychological safety), as well as practices and behaviors for getting there.

While the word “authenticity,” gets casually thrown around as if it is a simple, safe, and common thing, the truth is a bit more complicated. Authenticity, properly understood, is hard fought and often involves a fair amount of real and / or perceived risk. As a result, authenticity is often lacking in our places of work, in our personal and professional lives. Which is unfortunate, because authenticity is a pretty righteous thing. This session explores authenticity, what it matters on the individual and organizational level, and how to put authenticity to work for you.

On a fundamental level, inclusion is about creating spaces and places where people who are naturally different from each other can tell the truth to each other. Truth-telling also has consequences toward safety, and learning, and ethics, and our ability to solve problems. While we may want to tell the truth to each other at work, there are often risks (real and perceived) involved. One study suggests that as many as 75% of executive in Europe and North America have at least one business related issues they are not comfortable bringing up with their peers. And that is executives! Psychological safety makes it safer to tell the truth to your peers, and in this message, Joe prepare you to take psychological safety back to your team. The audience will be grounded in the research behind psychological safety, what it is, and how it is established. Participants will also receive a slide deck to help them introduce the concept to their team, assess psychological safety and develop an action plan. 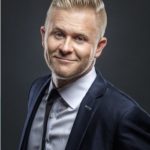 Want to bring Joe Gerstandt to your next event?  Please tell us a little about your event, and we will get back to you shortly!