He was named just the eighth head coach in Kansas basketball history on April 21, 2003.

While at Kansas, Self has won one national championship, a KU-record 12-straight regular-season Big 12 Conference titles and seven league tournament championships. He is 206-9 all-time in Allen Fieldhouse and has won more league titles (12) than has home losses (nine). In his first trip to the Final Four in 2008, Self’s team won the title. Self is one of 11 active coaches in NCAA Division I to have won a national title. Kansas’ 12-straight conference titles (2005-14) rank second all-time in NCAA Division I history.

In Self’s 13 seasons at Kansas, he has coached 10 NBA Lottery selections including Andrew Wiggins and Joel Embiid, the No. 1 and No. 3 overall selections in the 2014 NBA Draft. Wiggins was the second-ever Jayhawk to go No. 1 with the other being Danny Manning in 1988.

He won his 500th all-time game at Iowa State (108-96 in OT) on Feb. 25, 2013. The fastest KU coach to reach 300 wins at Kansas, Self’s milestone victory occurred during the 2013 NCAA Tournament against former KU coach Roy Williams’ North Carolina team, 70-58. Kansas’ 300 victories under Self in his first 10 seasons were more wins than any other NCAA Division I school in the previous 10 years.

In 2016, Self was named the Associated Press national Coach of the Year for the second time, also earning the honor in 2009. The 2016 AP honor was one of four Self was recognized for as he was also the national coach of the year by his peers (NABC), USA Today and Bleacher Report. The 2008 Winged Foot Award recipient for winning the national title, Sporting News named Self its National Coach of the Year in 2000, 2009 and 2012. The 2012 Naismith and Adolph Rupp national coach of the year as well, Self is a seven-time finalist for the Naismith honor (2000, 2001, 2002, 2003, 2009, 2012 and 2016). In 2014, Self received the Wayman Tisdale Humanitarian Award by the United States Basketball Writers Association (USBWA) and in September 2015 he received the Mannie Jackson – Basketball’s Human Spirit Award at the Naismith Basketball Hall of Fame induction ceremonies for his work with his Assists Foundation.

A member of the NCAA Men’s Basketball Rules Committee, the USA?Basketball Competition Committee and board member for the National Association of Basketball Coaches, Self has coached four league player(s) of the year and 57 all-conference performers, including five All-Big 12 selections in 2016. In addition, Self is one of six coaches in NCAA?Division I?history to have led three different teams – Tulsa, Illinois and Kansas – to the NCAA Elite Eight, including six times with KU (2004-07-08-11-12-16). The other coaches are: Gene Bartow, John Calipari, Lon Kruger, Rick Pitino and Eddie Sutton.

In the classroom, Kansas is one of 12 NCAA Division I schools that has achieved a perfect Academic Progress Rate (APR). Under Self, Kansas has 31 Academic All-Big 12 selections, including 23 first-team honorees. Included are Academic All-Americans Cole Aldrich (2010) and Tyrel Reed (2011) with Aldrich being named the Academic All-American of the Year.

Kansas used a veteran lineup to win its unprecedented 12th-straight, 16th Big 12 and NCAA-leading 59th overall regular-season title in 2015-16. KU posted a 33-5 overall record that included the Maui Invitational title, a 13-game winning streak and a 17-game win streak. KU won the league title posting a 15-3 conference record. The Jayhawks went on to win the Big 12 postseason championship and enter the 2016 NCAA Championship as the overall No. 1 seed. KU was ranked seventh or higher the entire season and held the No. 1 spot for five weeks in the Associated Press poll and four week in the USA Today Coaches’ poll. KU went 16-0 in Allen Fieldhouse, extending its nation’s longest active home court win streak to 42 games, which includes 40 in the Fieldhouse. Three Kansas players – Perry Ellis, Wayne Selden Jr. and Frank Mason III – each eclipsed the 1,000 career points mark, giving KU three 1,000-point scorers on the same roster for only the sixth time in school history. All five KU starters, Ellis, Selden, Mason, Devonte’ Graham and Landen Lucas earned All-Big 12 honors.

Losing the No. 1 and 3 overall NBA Draft selections from the previous season, Kansas reloaded accordingly in 2014-15 by winning the Orlando Classic and later it’s 11th-straight, 15th Big 12 and NCAA-leading 58th all-time conference regular-season title. For the second-straight year, Kansas had the toughest schedule in NCAA Division I. KU posted a 10-7 record against ranked foes which were the most wins versus ranked opponents in a single season in school history. KU climbed to as high as No. 5 in the national polls and spent 15 weeks ranked in the top 10. Rated the No. 1 league nationally, Kansas jumped to an 8-1 Big 12 record en route to the title and entered the NCAA Tournament a No. 2 seed for the second-straight year.

Kansas did not return a starter in 2013-14, yet Self guided the Jayhawks to their 10th-straight Big 12 regular-season title. With the toughest schedule in the nation and a starting lineup consisting routinely of three freshmen, a sophomore and a junior, Kansas posted a 25-10 record and won the league race with two games to go posting a 14-4 Big 12 slate. The Jayhawks entered the season ranked fifth by Associated Press and spent 14 weeks in the AP top 10, landing at No. 10 in the organization’s final poll of 2013-14. KU entered the NCAA Tournament as a No. 2 seed.

In 2012-13, Kansas returned four starters and showcasing one of the top freshmen in college basketball, the Jayhawks went 31-6 and tied Kansas State for the conference crown with a 14-4 record, won their sixth Big 12 and 13th all-time league tournament title and entered the NCAA Tournament as a No. 1 seed for the 11th time in school history and fifth time under Self. KU was ranked in the top-10 nationally in all but two polls and climbed to No. 1 in the coaches’ poll on Jan. 28. Kansas led the nation in field goal percentage defense, marking the eighth time in Self’s 11 seasons at KU that the Jayhawks have led the conference in field goal percentage defense.

Kansas’ run to the NCAA title game in 2011-12 was quite the accomplishment after returning only one starter and losing seven regulars from KU’s 35-3 team of 2010-11. In 2011-12, KU won its then-school-record eighth-straight conference regular-season title and advanced to its 14th Final Four. For the second half of the 2011-12 season, Kansas was ranked in the top-10 in the national polls and ended No. 2 by the coaches and No. 6 by the writers, pre-NCAA Tournament. Self was named the Naismith, Sporting News and Rupp national coach of the year and the 2012 co-Big 12 Coach of the Year.

In 2010-11, Kansas had lost three players to the NBA from the previous season, yet did not miss a beat as the Jayhawks, picked second in the Big 12 preseason poll, went 14-2 in conference play, capturing a then-school-record seventh-straight Big 12 regular-season title. Self was named the 2011 Big 12 Coach of the Year for his efforts. Kansas entered the NCAA Tournament as a No. 1 seed and advanced to the Elite Eight. KU was ranked in the top-four nationally in all but three polls during the 2010-11 season, hitting No. 1 on Feb. 14.

Kansas entered the year ranked No. 1 in 2009-10 and held that ranking for all but three polls throughout the year. In the RPI’s highest-rated conference in the nation, KU won its sixth-straight Big 12 regular-season title with a 15-1 record. KU entered the 2010 NCAA Tournament as the overall No. 1 seed and posted 30 victories for the third time in four seasons.

After a successful 2008-09 campaign, Self was named the national coach of the year by eight different outlets, including four listed in the NCAA record book: The Associated Press, CBS/Chevrolet, Sporting News and USBWA. The 2009 Big 12 Coach of the Year, Self was also selected as the national coach of the year by Yahoo! Sports, Athlon Sports, CBSSports.com and ESPN.com. That season, Kansas had lost six of its top seven scorers, including all five starters and returned less than 20 percent of all but one statistical category. KU went on to win the 2009 Big 12 regular-season championship, its fifth straight, going 14-2. The Jayhawks finished 27-8 overall in 2008-09 and advanced to the NCAA Tournament Sweet 16 as a No. 3 seed.

The 2006-07 season was not only historic for Kansas basketball, but also in the career of Self. As KU?won its 50th league title and 1,900th all-time victory, Self won his 300th career game with a road victory at Missouri. Additionally, KU?was preseason No. 1 by Sports Illustrated and ranked in the Associated Press top-10 for most of the season.

Self was named the 2006 Big 12 Coach of the Year and finished fourth in the Associated Press national coach of the year voting after guiding Kansas to a 25-8 record. The Jayhawks?entered the 2005-06 season unranked and with less than 15 percent returning scoring and rebounding, but Self orchestrated KU to a 15-2 record in its last 17 games, highlighted by a Big 12 Championship to go along with the league regular-season crown.

Kansas not only won a share of the Big 12 regular-season championship in 2004-05, but also opened the season ranked No. 1 nationally in the Associated Press and ESPN/USA Today Coaches’ polls. KU?was ranked in the top-10 for all but the final poll that year.

In his inaugural season at Kansas – 2003-04 – Self guided the Jayhawks to 24 wins and the NCAA Tournament Elite Eight. He tied former KU head coach Dick Harp for the most wins by a first-year KU coach, and only Harp’s 1956-57 team – which advanced to the NCAA title game – went further under a first-year coach than Self’s Elite Eight squad.

Self came to KU from the University of Illinois, where he guided the Fighting Illini to a 78-24 record over three seasons, including two Big Ten regular-season championships, a Big Ten Tournament title and three-straight NCAA Tournament appearances. In Self’s first season in Champaign, the Illini advanced to the NCAA Tournament Elite Eight.

Prior to his stint at Illinois, Self coached at Tulsa from 1998 to 2000, where he led the Golden Hurricane to a record of 74-27 in three seasons, including trips to the NCAA Tournament in 1999 and 2000. Tulsa went 32-5 in 2000, setting a school single-season record for victories and advanced to the NCAA Elite Eight.

Self began his head coaching career at Oral Roberts, where he resurrected the program. Before Self took over the reins, ORU had compiled the worst record in the program’s history with a 5-22 mark in 1992-93. Although Self’s first ORU team managed just six victories in 1993-94, the win total increased to 10 the following year. In his third season at the helm, Self guided ORU to an 18-9 record. In 1996-97, ORU registered a 21-7 mark and made the school’s first postseason tournament appearance since 1983-84, receiving an invitation to the NIT.

Self spent the 1985-86 season on Larry Brown’s coaching staff at Kansas. While Self was at KU, the Jayhawks went 35-4 and advanced to the Final Four in Dallas.

A native of Edmond, Oklahoma, Self played basketball at Oklahoma State where he was a four-year letterwinner from 1982 to 1985. He received his bachelor’s degree in business in 1985 and a master’s degree in athletic administration in 1989, both from OSU.

He and his wife, Cindy, have two children: daughter, Lauren, who graduated from KU in 2013 and is married to Hayden Browning, and son, Tyler, who was on the KU team.

A Conversation with Coach Bill Self 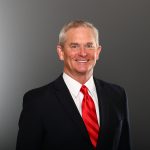 Want to bring Bill Self to your next event?  Please tell us a little about your event, and we will get back to you shortly!